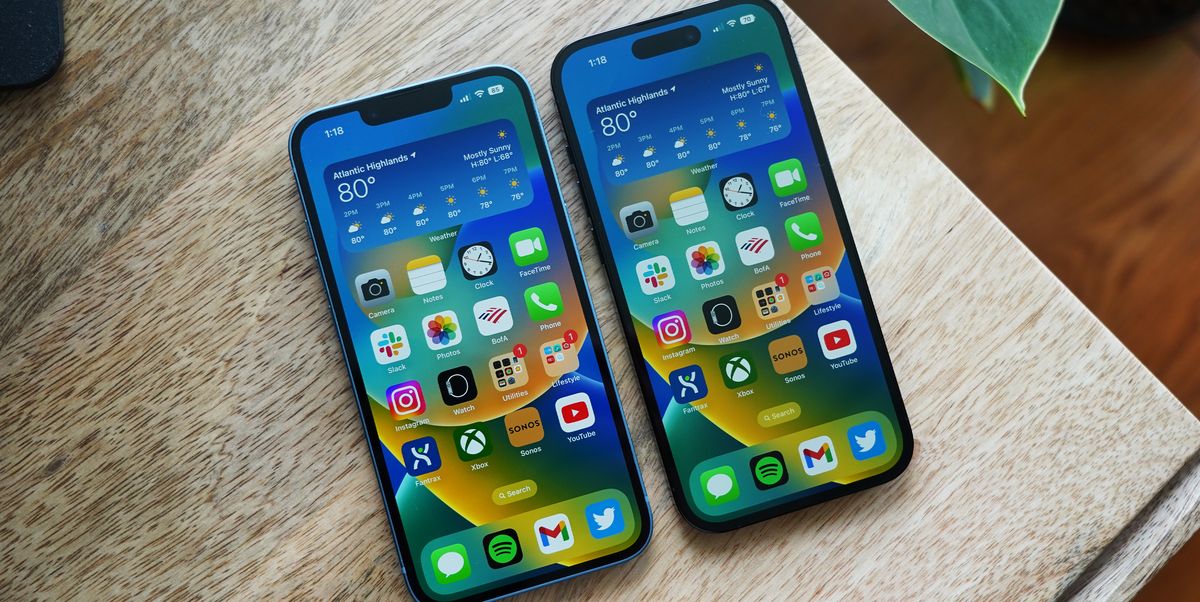 The truth is, this year, Apple’s newest iPhones are more different than ever before. Sure, the iPhone 14 ($799+) and iPhone 14 Pro ($999+) are available in the same exact 6.1-inch and 6.7-inch sizes (the first time Apple has done this in years), but Apple gave the Pro models a significantly different feature set but kitting them out with an always-on display and an interactive notch called the “Dynamic Island”.

And for the first time ever, Apple has given the Pro models a completely different processor — A16 Bionic versus the iPhone 14’s A15Bionic (the latter of which is the same processor that is in the iPhone 13 Pro).

I’ve been testing the iPhone 14 and the iPhone 14 Pro for the better part of the past week. Yes, they both feel like iPhones and do a lot of the same things — they both run iOS 16, after all — but in some ways they feel like very different machines. Both from each other and from iPhones of the past.

What are the biggest differences between the iPhone 14 and iPhone 14 Pro?

The iPhone 14 and the iPhone 14 Pro are different in a number of ways, but there are three really big ones.

In addition to those main differentiators, the iPhone Pro 14 has many of the same extra features that the iPhone 13 Pro had. Both Pro models have brighter displays that support “ProMotion,” which is Apple’s term for a 120Hz refresh rate that makes scrolling and swiping feel a little bit faster and smoother. The iPhone 14 Pro supports macro photography, while the iPhone 14 does not. Thanks to the new processor, the Pro models also get slightly better battery life.

What is the Dynamic Island? And is it actually useful?

See also  How to Use iMessage Like a Pro

When you’re on a call, using a Timer or playing music (on apps like Apple Music, Spotify, YouTube Music or Pandora) and then you go to the Home Screen, Lock Screen or just another app, the Dynamic Island will expand at the top of your screen and create a little icon to show you that you’re still on a call, or that your timer is running, or that a song is still playing. You can then tap the Dynamic Island at any time to open that app directly or long-press it to open a smaller widget of that app. It’s almost like a second display.

The Dynamic Island expands the traditional notch and, in a lot of ways, acts as a second screen you can interactive with. Here you can see a song playing on Spotify while I’m navigating the Home screen.Tucker Bowe
If you long-press the Dynamic Island it’ll expand into a larger widget that you can interact with. In this instance, Spotify allows me to chance the song or pause the music without having to open the entire app.Tucker Bowe

When you’re not using an app, the Dynamic Island has a bunch of other neat uses. It shows the Face ID icon to let you know if your iPhone is unlocked or not. It shows status icons like when you’re in airplane mode. It also shows an AirPods icon when you have your AirPods connected.

You can expect more apps to support the Dynamic Island in the near future as Apple has an open API that developers can take advantage of. Apple has also announced that Dynamic Island will work with Live Activities, a feature that will roll out later, so you’ll be able to track sports scores or rideshare updates from Uber or Lyft from the new notch.

What can you do with the iPhone 14 Pro’s always-on display?

Another one of the main things that differentiates the iPhone 14 Pro from the iPhone 14 is its always-on display. This is a feature that Android smartphones have had for years, but it is nice for people who want to quickly see something — like the time — at a glance without having to pick their phone up or unlock it. The iPhone 14 Pro’s always-on display can also show you the widgets that are on your Lock screen, so in addition to the time you can see things like the weather, any upcoming alarms and the battery life of your Apple Watch or AirPods.

One neat thing about the iPhone 14 Pro’s always-on display is that if you place the phone face down on a surface it’ll actually turn off. It’s a neat way to conserve a little bit of battery. Apparently, the always-on display will turn off your iPhone 14 Pro detects that it’s in your pocket or if you’re wearing an Apple Watch and you go out of Bluetooth range, as well.

If you’ve owned one of Apple’s latest Apple Watches — specifically the Series 5 or later — you’ve seen the benefits of an always-on display first hand, and be familiar with the convenience. But it’s not a total game changer.

Is the iPhone 14 Pro’s camera that much better?

The main camera on the iPhone 14 Pro is the biggest differentiator. It’s a 48-megapixel camera, which is huge compared to the iPhone 14’s 12-megapixel main camera, and this just helps the camera grab more light and capture a more detailed photo. When comparing photos, you can tell the difference between an iPhone 14 and iPhone 14 Pro photo of a well-lit scene, but you can really see it once you start shooting in the less-than-ideal lighting situations.

The iPhone 14 Pro obviously has a telephoto lens, which the iPhone 14 lacks, and a more capable ultra-wide lens, but it’s worth noting that both new iPhones have lenses with faster apertures. They also have a new computational photography feature Apple is calling its “Photonic Engine,” which takes multiple photos with each photo to improve its colors, textures and details. (It’s very similar to Deep Fusion, which Apple introduced a few years ago). The result is that the iPhone 14 and iPhone 14 Pro are both able to capture better photos in low-light situations, especially when compared to last year’s models.

The iPhone 14 and the iPhone 14 Pro have a lot in common as well. Their front-facing camera systems are basically the exact same (even though the Pro has a Dynamic Island); they actually take better selfies compared to previous iPhones, thanks to improved autofocus and a wider aperture. Both rear camera systems support the new Action mode, which is Apple’s neat computational photography that stabilizes video when you, the photographer, are also moving.

Like previous years, both the iPhone 14 and iPhone 14 Pro are integrated with MagSafe. This means that they support fast charging via a MagSafe charger and are compatible with the exact same ecosystem of MagSafe accessories.

There are two other new features that the iPhone 14 and iPhone 14 Pro have, both of which Apple hopes you never have to use. The first is car crash detection, so if you’re in an accident and you can’t reach your phone (or you’re unconscious), it can call emergency services for help. And they both will have satellite connectivity, so if you find yourself off the grid and in an emergency situation, you’ll be able to send a send a message to emergency services (but you’ll need to have a clear view of the sky). Note: Apple’s satellite connectivity isn’t rolling out until later in the year.