“We feel compelled to do things a little differently. We approach things with a people-centered approach. We give folks a lot of space in sort of resolution of conflict in the organization.” Alex Matisse is video chatting me from his parked car, talking about the philosophy that drives his Asheville, NC-based ceramics company, East Fork. There were no available meeting rooms inside the headquarters – an annoying logistical issue familiar to many. In this instance, though, it’s a good sign: East Fork has grown. A lot.

Matisse answers questions with adlibbed and perfectly detailed mini-essays. He earnestly articulates stories of his early career, founding East Fork, the “challenging” work of “stabilizing and maturing the organization” and the products, plans and, in particular, the people who make it all happen.

Gear Patrol has covered East Fork broadly and its cult-favorite hallmark product, The Mug ($40), specifically. Every batch of The Mug used to sell out, often in minutes, thanks to massive online hype from discerning drinkware enthusiasts. (A Gear Patrol Magazine profile aptly named it “The Internet’s Favorite Mug.”)

“At the end of the day, we are still trying to make really beautiful pottery, and we’re trying to do it in all of these new ways.”

“The mug feels like one of those things that you make, and you carve away everything that’s not essential, and you’re left with something that feels pretty perfect and pretty resolved,” Matisse tells me. That may be the case now, in 2022, but The Mug has greatly evolved over time, just as East Fork’s mission and production processes developed in lockstep with company growth. At first, The Mug was made on a potter’s wheel, entirely by hand. Now, automated machines are used to satisfy the “frenzy” of demand. Still, making The Mug is relatively labor intensive despite production upscaling and design changes. Yet, it’s a resounding success. Matisse and his team have directed those powerful winds of change toward other areas of the company – among them an uncompromising focus on workplace equity – also to great success.

See also  Save Big on a Great Pellet Grill Smoker, Right on Time for Game Day

For years, East Fork was a humble operation. The entire company was manned by just Matisse, his wife Connie, their business partner John Vigeland and a small team of apprentices –– whose output struggled to satiate a growing fanbase. Today, East Fork employs 125 people; in early 2022, the company began paying a $22 per hour base pay. Its workforce includes plenty of new faces but also legacy employees, including East Fork’s

newest potter, who was at the first firing of East Fork’s old wood kiln 10 years ago.

While some elements of the work are still handmade, the vast majority of production is now done inside two large manufacturing plants packed with machinery. It’s a big change, as Matisse points out: “bringing in the machine that makes 3,000 bowls a shift is a very different thing than making it on a jigger, which is equipment from the beginning of the industrial revolution.”

That upscaling allowed The Mug production to proliferate. In turn, huge increases in output allowed the company to focus on people and provide livable base pay rates. Thanks to bold decisions by Matisse and his leadership team, progress is obvious across the entire product range. While it has expanded greatly, East Fork still exhibits the same degree of design and craft Matisse strives for. “At the end of the day, we are still trying to make really beautiful pottery, and we’re trying to do it in all of these new ways,” explains Matisse. “It’s just a different challenge now. The challenges now are so much more nuanced.” Those challenges, by and large, center around further growth. But for Matisse, it’s still about people.

“I had a burning motivation to do something of some scale and to make some impact.”

“People struggle with change in organizations,” says Matisse. “It’s scary. Especially if you’re not the one that’s in charge of that change, it feels like it’s being done to you. How do we not drag people along, but lead them into it?” Managing change is a universal struggle – and one very familiar to Matisse.

See also  Which Oil Should You Use to Season a Cast-Iron Skillet? 4 Experts Weigh In

During and after college, Matisse worked with and/or apprenticed for an impressive “family tree” of well-known potters. Matisse credits this era of his career, much of which was spent doing intensive manual labor to support his teachers’ potteries, as a hugely formative step.

“You’re not there to develop your voice and explore things; you’re there to learn the nuts and bolts of operating a real working pottery that makes a lot of pots, fires them in a wood kiln in a very specific way, and sells them directly to a collector base.”

In 2009, Matisse left his apprenticeship to start his own small pottery. He met Connie, and soon thereafter, the couple made plans with Vigeland to create East Fork. “We didn’t come into this after going into business school, trying to disrupt an industry,” he says. “I had a burning motivation to do something of some scale and to make some impact.” Indeed, what powers the brand is less ‘MBA’ and more rooted in principles. Matisse cites a constant “tension” of values and vision among his leadership team as a driving force behind the brand’s momentum. “It’s maddening at times to be fighting against a system and talking about all of the inequities that it perpetuates while also operating within that system.”

But it’s working. Fast forward to the East Fork of today, and it’s easy to see those opposing energies. The humongous operation includes not just production but in-house marketing, sales and customer-facing sectors. And yet, the brand’s people-forward tenets are firmly in place. “If we’re going to change and do something drastically different, we’re going to do it in our own way,” Matisse says of he, Connie and John.

Matisse says focusing on the “further horizon” is where he thrives as a leader. “I get excited by the big unknown, like the sled dog at the very front of the pack that doesn’t actually pull a whole lot of weight but provides a lot of motivation for the pack behind them. I’m excited by the change and the growth. That’s what I bring to the thing.”

For Matisse and his team, the “further horizon” means a lot of expansion because sustaining the business they’ve created will take more customers. They want to expand into markets like New York, San Francisco and Seattle. And enter the hospitality market “in a big way” (meaning foodies should keep their eyes peeled for East Fork ceramics at hotels and restaurants). Matisse wants to open brick-and-mortar storefronts and offer tours of the manufacturing plant, much like neighboring Asheville breweries do.

“I’m excited by the change and the growth. That’s what I bring to the thing.”

Despite the thrill of discussing those lofty aims, Matisse returns to the core of what now defines East Fork: an equitable, secure foundation for its employees. High-quality, beloved products will always be East Fork’s output, but the people who make it all possible remain top of mind. “Regardless of what’s coming down the road in 10 or 20 years, people need to be fed; they need to have a roof over their head. They need to have stable employment. So, my focus at the moment is maintaining that.”

Just as crucial as the craftsmanship and artistry literally baked into each of the company’s products is the thick streak of authenticity baked into East Fork’s ethos – that “doing things differently” thing Matisse and his team are compelled to pursue. Thanks to bold leadership and a motivated staff, the company’s growth journey has been staggering. And most importantly, its further horizons seem bright as day. 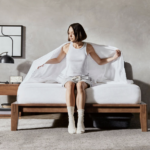